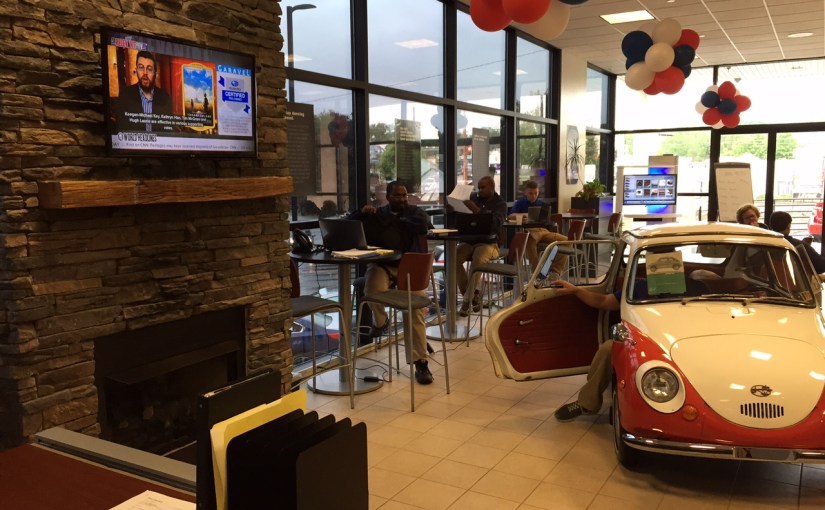 What’s on Your Business TV?

Televisions are becoming a fixture in businesses throughout the United States. While many business owners have decided to buy TVs, not many put much thought into what is displayed on them. TVs can help visitors pass the time but they can also draw customers away from you, and to competing businesses and products.

Block Out the Competing Ads with Competitive Ad Block®

It’s Relevant TV blocks out all competitive ads from your television. In a car dealership, you will never see another car dealership message on your screen. In a restaurant, It’s Relevant TV will not show any other dining establishments. IRTV’s proprietary technology takes care of the blocking automatically and infuses your TV with more relevant TV programming in place of lengthy ad breaks. It’s Relevant TV shuts off ads that could be harmful to your business, while reducing the number of overall ads significantly to make your customers happier viewers. The average hour of cable television includes between 16 and 22 minutes of advertisements. It’s Relevant TV limits ads to 3 minutes, making sure that the focus of the television is on the satisfaction of your customers. You can learn more about the differences between cable TV and It’s Relevant TV on the official site.

Imagine you are sitting in a Ford Dealership getting your car serviced. You may be waiting a few hours and have a TV in front of you. The television, like many, is tuned to a local news station. In the time you are there you will not only see the TV programming that the channel offers, but also countless ads for other car dealerships. Chevy, Kia, Hyundai, Honda, Toyota, Mazda… all appearing on the screen as you wait. Catchy Ads showing happy customers, great lease specials, low financing rates, credit guarantees– all much more attractive than the car you are waiting to get back.

This is a real problem for the business. As you certainly know, cars are big ticket items. They are generally the second largest purchases people make in their lives. If only one or two people in the service center are pulled towards another brand over the course of a year, the negative impact on the dealership is in the thousands of dollars.

Now imagine you are in a restaurant eating your meal.  On the TV, you see an ad for a competing establishment offering great prices and appetizing food. While the ad may not keep you from your current purchase, it could very well give you an alternative idea for your next meal, instead of coming back to the restaurant you are in.

As silly as the quick video we prepared above may seem, the effect is very real. Regular TV exposes customers to competitors when they are most impressionable. As a business owner, you would never welcome a competitor to walk in at your business location to hand out their coupons, offer better deals, or speak directly to your customers. So why allow it to happen through your TV?

The answer is simple: Up until now there wasn’t much of a choice. If you wanted to entertain customers with your TV you had to deal with the ads. But with It’s Relevant TV‘s Competitive Ad Block®, you block the competing ads, and keep great TV programming.