Regardless of  who you voted for in the presidential election, your decision was influenced by television. Between the constant TV news coverage and the paid ads that ran, everyone formed judgments and impressions based on what they saw and heard. TV makes a lasting impression. Let’s take a look at what this means for broadcast television, and for TVs inside your business.

24/7 News Networks Care About Their Businesses, Not Yours

Today’s 24/7 news networks turn a 1-day event into months of drama. They take the normal “coverage” and inject scrutiny, conspiracy theories, and sex scandals to bring viewers on a rollercoaster of ups and downs before the grand finale (election day). News feels more and more like entertainment, and that’s not by accident. Plenty of intelligent people have already pointed out that networks do this to boost ratings and generate greater revenues for the crowded networks. And while I would agree that revenue is a driver, I feel that the larger problem is a growing laziness among the people that design the format of these shows.

The News used to be a place that you would come for facts and knowledge. It was the work of large teams of people that spent days or even weeks to bring you researched programs that included quotes from actual experts and your trusted newscaster.  The best part was that you left each broadcast better informed than when you began watching.

Things have changed. While the basic format of having a news anchor inside a studio reporting on the day’s top stories has been constant for decades, the pressures to do more with less money is changing the face of it. The fact of the matter is it’s much easier and far less costly to put a few people around a table to argue about a topic than it is to research and report on a news story.

News reporting can be extremely costly, especially for TV. I ran a video news company in the Northeast for almost 4 years, and we put a lot of work into each story the staff produced. From sourcing a story idea to setting up interviews, cross checking facts, recording the actual video, finding b-roll (cut-away shots), editing the video, fact checking, publishing and distributing the story – it took hours just to produce a minute or two of content. It’s hard to sustain a business with the kind of effort needed to do news reporting right.

Taking a look at most prime time cable news shows you see a familiar pattern these days. At the top of the hour you have the team of reporters and experts that are unbiased and reporting the facts of the day without forming judgments. All sitting or standing in the beautiful professional studio.

Then a few minutes later the professional journalists and experts peel away, and a panel of professional-looking people start to share their opinions – in the same space. Panel members can say whatever they want to say and their statements appear to be researched, authoritative and official. It feels like you are hearing from other experts when in reality you are hearing from surrogates (people that will stand by the candidate they support no matter what).

If you recognize any of the people below, then you have come across exactly what I am writing about:

This Would Never Happen Anywhere Else

Imagine a doctor’s office for instance. You schedule an appointment with a well-established practice. You go to the office and sit down with someone in an exam room. The person gives you their opinion on your physical condition and makes recommendations on things you should do once you leave. It feels a lot like you just sat down with a doctor and got a medical opinion.

But what if the person you sat down with isn’t a doctor at all?
What if he/she wasn’t a nurse, or even in the medical profession?
What if you found out that the person you saw and heard from is merely someone that knows of the doctor, nothing else? Their medical opinion would hold absolutely no weight.

This is exactly the problem with the overuse of surrogates and non-experts in news programs today. They have the appearance of authority and are happy to share their opinion even though it’s not necessarily in your best interest.

For years the news industry has strived to be fair, factual and unbiased. However, in this election season we took one of the most noticeable turns away from that. The strive now seems to be more towards “balancing the sides”. Instead of sticking to the facts, these broadcasts allowed people to share their opinions much like facts, just as long as someone on the opposite side of the argument could do the same.

This created some real distractions within the campaign. Ultimately it may have created some single-issues for voters that moved them one way or the other in the election. Hearing that Trump “sexually assaults women”, or that Hillary “will be put in jail for deleting her emails” creates serious concerns for voters. But all of these kinds of things were being spoken countless times a day by people who looked to be authorities on what they were talking about.

You know it’s bad when the news broadcast has to fact check itself.

Television has Become Bad for Businesses

While television as a whole has more offerings than ever, and is seen in increasing numbers of stores and public places, it’s not helping businesses as much as it should. With endless channel choices at our fingertips, TV is great for the home. You can easily tune from one channel to the next when faced with something you don’t like, but not in a business.  More and more stores, offices, and public places are installing televisions simply because they can. Unfortunately, the programming the businesses choose to display on the screen often does more harm than good.

The bottom line is: even with endless channel choices, you can’t control what appears on any given channel at any given time. You could watch CNN for instance and enjoy a heartwarming story about one of the CNN Heroes.  But just one minute later you’re faced with disturbing images of war and terrorism half a world away. This can be off-putting and depressing to customers as they watch in a business.

Even when the topics aren’t disturbing in nature, they are often exhaustingly overplayed. It’s hard to forget the months of nearly non-stop coverage of missing Malaysian Airlines flight 370. With no new information CNN had to constantly improvise, bringing up new theories, even having anchors use toy planes. 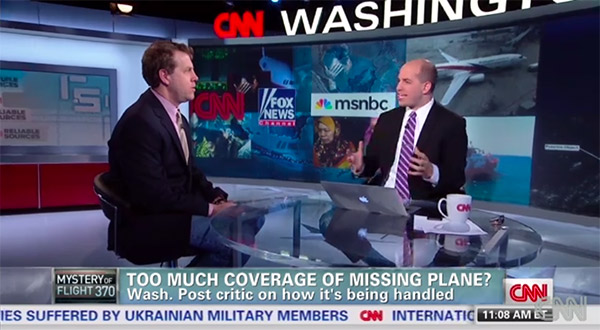 It’s not just news stations that cause stress, discomfort, boredom or other negative feelings. I’ve heard complaints about even the most neutral of channels like The Food Network and The Weather Channel. People have different tastes, and leaving them with only one programming type for an extended period of time is a surefire way of losing their attention or worse: becoming a bother to them.

Take Control of the TV in Your Business

As a business owner, it is up to you to make the right choices for your business. You may have spent time choosing the colors of your walls, the hours you are open, the people you want representing your business, the type of music that plays, and the kinds of refreshments you offer to people when they visit. All of these examples are things that have some influence on the way people perceive your business. It’s the interactions your customers have with each element that dictates their overall satisfaction of your location.

We’ve found that the happiest customers are the ones that get to see a variety of content.  They don’t want to feel like they are being bombarded by advertisements. For this reason, we created a platform called It’s Relevant TV that provides an ever-changing assortment of short-form television shows. The service blocks out competitor advertisements and gently brings the business’ own messaging and real-time social media onto the screen. The custom networks can operate with or without sound; all of the video content can be overlayed with optional subtitles.

An experienced editorial team screens the included licensed TV programs before delivery to the businesses. All of the programs that we distribute are family-friendly.  We keep all political coverage short, to the point, and truly unbiased. It’s Relevant gives each business 50 categories of video content to choose from. This ensures that the programming isn’t just risk-free, but is topically oriented to visitors of the specific business. The business easily controls the messaging and social media syndication.

Learn from the Election

This election season, one thing was obvious: the campaigns understood the power of television. They knew that messaging seen on TV will stick in people’s minds and influence their decisions. This is why we saw the campaigns push their  surrogates to TV. The lazy TV networks were happy to invite them on because it saved money and filled their airtime.

TV has tremendous power over decision making. Don’t be lazy with yours.
Make sure your TV is working in your best interest as a business owner.